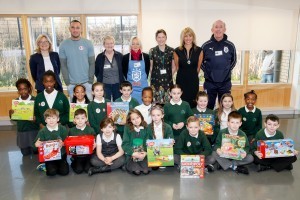 We are extremely lucky to have been picked as one of the first six schools in Kirklees to have our Breakfast Club funded by the  charitable trust set up by Huddersfield Town FC. This means that all the food for the club will be provided free of charge. The aim of the trust is to provide a breakfast to as many children as possible. The club is called ‘Early Kick Off’ to reflect its connections to the football club. The launch was on November 12th 2012 and attended by members of the Trust and club, including former Town player Andy Booth. Huddersfield Town Foundation are still actively involved in our breakfast club. The photo above shows some of the members and trustees with toys and games they generously provided for the children.

The club is free to attend and is open to Key Stage 1 and 2 children only. Mrs Mellor opens the front gate at 7.55am and walks the children down to the Hall. Children arriving after the gates have been opened should walk down the footpath on their own. Hands are sanitised before children enter the Hall. KS1 children go to the Dance Studio and KS2 remain in the Hall. Unfortunately we cannot accommodate Reception children. The front gates are closed at 8.15am and children arriving after this time may be refused entry.